Welcome to the home of Goblin Base Entertainment LLC! We're currently working on several projects that we plan to publish on this site in the future. You can see some basic information about each of them by clicking on their names on the Projects page.

In Tablespess, Proficiencies are stats you use for various skills, knowledge, etc. Proficiencies do not have to relate to your character’s stats. You simply pick a value from -1 to 5 depending on how well you think your character should perform at that skill. You’re able to freely add Proficiencies to your sheet as you need them.

When you roll for a Proficiency, you roll a d20, take that number, and reference it on the roll chart based on the stat you have for that Proficiency. The color you get determines how well you did at that thing, generally. Red is a failure, Yellow is barely making it, Green is a success, and Blue is a great success.

For example, let’s say Mr. Example needs to see where some tax collectors have gone while he’s hiding from them. Mr. Example has to roll for Perception, and we’ll say he got a 10. On the roll chart, getting a 10 with a 2 in Perception gets him a Yellow. With this result, Mr. Example is barely able to recognize the uniform of a tax man from the corner of his eye.

As an added bonus, we've got some story content written by our Goblin Horde Keeper for Mr. Example:

The evil pastries Mr. Example had locked up in his cargo bay were beginning to become a problem. Not because they were hazardous to eat, oh no. Mr. Example had a gut tougher than steel. Rivaled only by his mettle. No, the real issue was that stupid cop had a Tax Collector with him for SOME reason. Unpaid unrealized pastry gains tax was going to ruin him, after all, Tax Collectors can smell unpaid taxes from miles away. Like roaches they were. Cropping up the second you look away, only to ruin everything you own once they infest them.

There were worse places to be compared to orbiting the star BVC-015. The radiation was nasty, but hey, at least it was warm. Mr. Example popped open a hidden compartment in the cockpit of his ship. Inside was a shotgun, a shield, and a spare space helmet. Digging through, Mr. Example found the real treasure. An unused water bottle.

The carnivorous pastries were a wild bunch. This was what, the fourth cop they had eaten? It was hard to tell anymore. Mr. Example definitely thought they were a lot less appetizing since the first time he laid eyes upon them. Better to take one's chances on another ship than risk imminent death from pastries that ate sentients and were perpetually on fire. That "Made in hell" packaging desperately needed some warnings. Still, finding another ship was going to be difficult on account of this one being stolen. Who's going to want to trade for a ship with hostile cargo? Not to mention the system wide manhunt making legal passage a difficult prospect. Should've just stayed asleep today. Then none of this would've happened!

Welcome to the first Tablespess Spotlight! In this edition of our biweekly Goblin Base update post we’ll start going over the character sheet, with the help of Mr. Example, an example character we’ve made. You can see a screenshot of Mr. Example’s character sheet below. Click on it to get a closer view. There are a lot more lines of inventory space for Misc. Items not visible in this image along with additional pages we’ll discuss later.

By default, Tablespess is built to work with the Spess setting. We may mention campaigns being run in other settings, using modified versions of Tablespess’s sheets, etc. We plan on releasing additional content later down the line for the game to work better in other settings, but we’ll get into that later on. With all of these posts we’ll be assuming you have at least some basic TTRPG knowledge. The game comes packaged with a whole bunch of mechanics and rules, but you don’t have to use them if you don’t want to. Conversely, you could add more rules/mechanics depending on what you’re trying to do. Of course this is something you would decide as the GM with your players’ input. 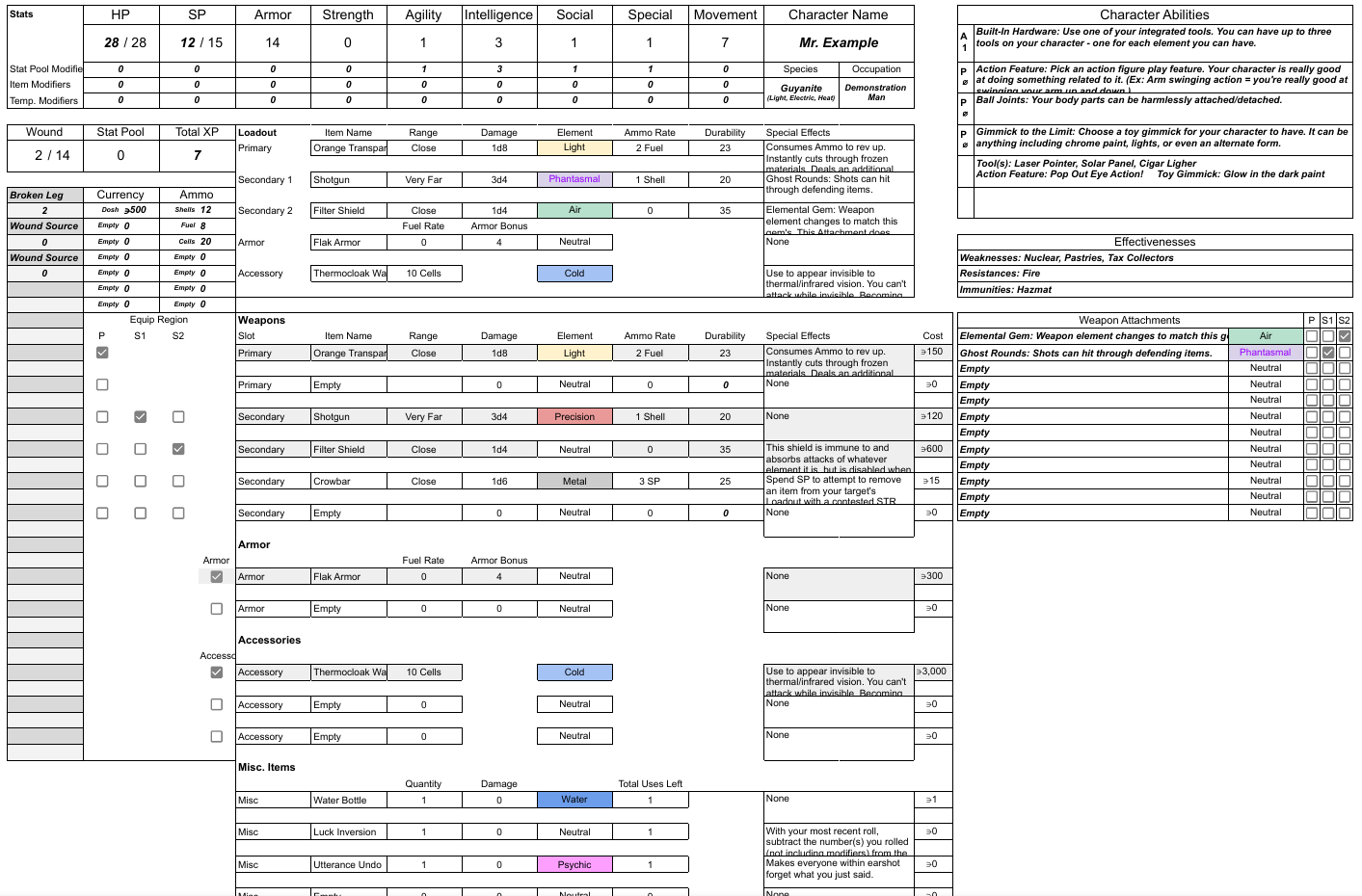 Getting back on track here, we’ll start at the top of the sheet with Mr. Example’s stats and basic character info. All stats have Modifiers that you use to change their values. There are different Modifiers for different use cases as can be seen in the screencap. Depending on how you’re running your game you may wish to change the names of the Modifiers. In one campaign, a GM replaced Temporary Modifiers with Species Modifiers for his setting.

HP in Tablespess is based on your character’s Armor. Some items have the ability to temporarily reduce your target’s Armor (and by extension HP). Reach 0 HP and you’ll be knocked out. You can be given Overheal in Tablespess, but we’ll cover that alongside healing items in a future post. We have a different system in place that handles fatal damage (Wound Damage) that we’ll go over later in this post. Moving on, we have SP (Skill Points), a resource you can spend to use Skills/Abilities and certain items. Your SP will increase as you gain XP and as your Special stat increases.

The rest of the stats listed here should be familiar to anyone who’s played some kind of RPG before. Special we use as a catch-all for things not covered by the other stats. Movement is in Hexes (each Hex is ~5 ft) and increases with your AGL (Agility).

Mr. Example is a Guyanite (elemental bio-mechanical aliens that look like action figures) with three elements. He’s a Demonstration Man by trade, but has been swept up into an adventure by circumstances beyond his control. The various playable species in Tablespess each get four Character Abilities. The sheet has support for up to 6 abilities, which is there for use in Table Lite, a version of Tablespess without Skill Trees. Be on the lookout for Table Knight, a wacky fantasy ruleset for Table Lite, in the future. In Table Knight, each Knight starts with one Character Ability and can gain more over the course of an adventure.

These Character Abilities give Mr. Example three integrated tools, an action feature (that makes him better at something related to what it is), the ability to harmlessly attach/detach his limbs, and an action figure gimmick. The Tools/Action Feature/Gimmick are marked in the unused ability space. We’ll go over what the numbers/symbols next to the abilities mean in a later post.

Mr. Example has some Effectivenesses. This is an optional feature you can add to your character. For every Immunity you get, you must add two Weaknesses and for every Resistance you add you must add one Weakness. Even if you’re immune to something, you can still be hurt by that thing through Wound Damage. Effectivenesses can be Elemental or more abstract. You can use them to turn character traits into more codified parts of the game’s mechanics. Mr. Example has a Weakness to Pastries, for instance. He’s got a bit of a sweet tooth, so he might be distracted if someone has a slice of cake out in the battlefield.

His Stat Pool and XP are currently at 0, which is what it should be at for a newly made character. We’ll cover what these do when we talk about character progression in the future. Mr. Example currently has 2 Wound Damage, which he got when he tripped and fell into the cargo hold of a Divespace Freighter and broke his leg. Wound damage is the threshold of fatal damage your character can take before it dies. Your Wound threshold is half of your max HP. You can get Wounds from various sources, which you mark down in the corresponding spot on the character sheet.

Depending on how much Wound damage you’ve taken from a source, you will have to play your character differently. Since Mr. Example’s leg is broken, he’ll have to limp around on crutches for a while. You can mitigate how much your Wounds are affecting your character by Patching them up, but this does not reduce the Wound Damage you’ve taken. You’ll need to receive proper medical attention, a lot of rest, etc. in order to properly recover. The way your Wounds affect your character are created by the GM. We’ll have a list of example Wounds/Effects in the GM’s Handbook.

Mr. Example has some cash on him, but his bank account got frozen so he isn’t able to access the ATM right now. Dosh is the main currency of Spess, but you can change the currencies used there depending on your setting. He’s also got several different types of Ammo. The various items in Tablespess specify what kind of ammunition they take, but you may wish to ignore that and use a simpler, universal ammo system so you don’t have to keep track of as many things.

Next we move onto the Loadout and Inventory. In Tablespess, your Loadout has the Weapons, Armor, and Accessory you currently have equipped. You’re able to swap items from your Inventory and Loadout freely during combat on your turn. You have limited dedicated Inventory slots for your Loadout items and can use the checkboxes to the left to equip/unequip them. Accessories serve as additional abilities in item form and include things like watches, masks, and boots. Weapons have Durability and can be targeted by Enemies so pay attention to what you have out. We’ll explain more about Durability when we talk about combat in a future post.

Lastly, we get to Mr. Example’s Misc. Items. Currently he only has a water bottle and a couple of Scrolls. Scrolls are single-use magic items that have a wide variety of effects. Other limited-use items like Grenades and any other random junk you might find on your adventures are also housed in this part of your Inventory. Join us again in another couple weeks for the next Tablespess Spotlight!

It's been quite some time since the last update to the Goblin website. We've been largely busy with real-world things as Goblin Base is a side gig for all of us. We have been making some progress on the projects listed on the site, albeit slowly. We have organized our progress better, with proper checklists and orders of operations. Currently, we plan on completing and releasing a public version of the Spess World Bibble before we finish/release our other major projects. We won't have any concrete release dates, but stay tuned for more progress highlights.

The old Tablespess progress highlight we had here before was pretty outdated so it's been removed. We will be reposting all the information it had and more, but in smaller, bite-sized posts every other week. If there is any particular project you would like to see more of, feel free to send us an email. Contact information is in About. We've also published our current list of Members/Associates as well as some of our company policies on the About page.